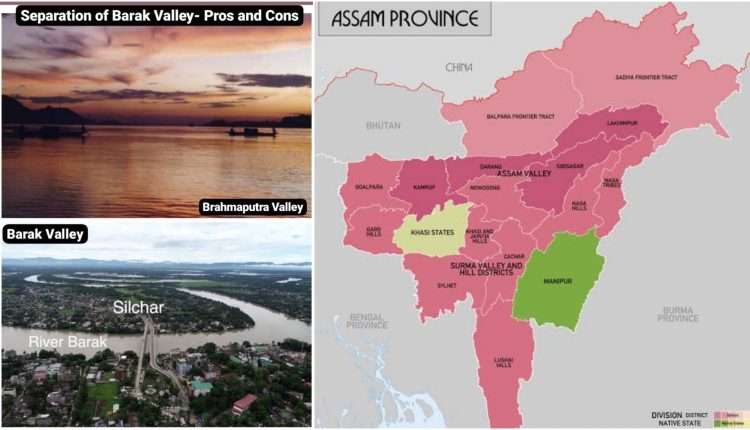 The United Territory Demand Committee which came into existence in the year 1971, officially marked the beginning of the present demand for a separate Union Territory, which would be named ‘Purbachal’. The merger of Barak Valley with Tripura was in the news around 1955, the importance of which is seen in the present times. The geographical division between Barak Valley and Brahmaputra Valley has eventually led to cultural divergence as well. Fingers have been pointed out towards each other on multiple occasions while great co-existence has also been shown but on rare occasions.

The separation of Barak Valley as an independent State or Union Territory has been the most debated topic since a few years. Separation can be a complete game-changer and tables can turn positively because anyway in the present times, Barak Valley is not under safe hands. But at the same time, one cannot deny the challenges that Barak Valley will have to face in case of separation.

1) Whenever a new State or Union Territory is formed, the Centre gives special attention on the needs of the newly formed State/Union Territory and makes new development policies in favour of that State/UT. In that way, Barak Valley might be a beneficiary after separation.

2) Brahmaputra Valley has seen enormous evolution over the past years but Barak Valley, on the other hand, has recently been told that the most awaited flyover won’t be feasible.

3) Assam Government is hardly catering to any of the needs of the people of Barak Valley. The roads, medical facilities, national media coverage of important issues, infrastructure, cleanliness and hygiene, Guwahati has seen it all positively and Barak Valley on the other hand, has witnessed no development in any of the above mentioned sectors.

4) Assam has always refused to acknowledge the people, mills, industries, language etc. of Barak Valley.
After the recent border skirmishes, the Chief Minister of Assam was ready to give away the concerned land of Cachar to Mizoram, if necessary. It questions the protection of the land of Barak Valley in future.

5) Every now and then, the linguistic identity of Barak Valley is threatened by somebody or the other. Disrespect has always been showered upon the sacrifices made by the 11 martyrs on the 19th of May, 1961.

6) The most requested bench of Guwahati High Court to be opened in Barak Valley has always been disregarded.

7) The patients of Barak Valley suffering from cardiac arrest or any other medical emergencies have to be airlifted. Not everyone carries the financial capability of airlifting their family members. There have been so many appeals for development in the medical equipment, neurology and other health departments but no positive response from their part.

8) Any moment, Assamese language might become the sole official language and might be imposed upon the people of Barak Valley and we might not be able to do anything about it.

9) Assam’s power centre, Dispur is located in the city of Guwahati which can be one of the reasons for endless power cuts in Barak Valley. The problem of electricity ignorance might be solved if Barak Valley is separated.

10) Separation might put a permanent end to the Bengali-Assamese tensions and riots that have taken place frequently. If two different cultures cannot co-exist, there will be friction if kept together.

11) We have seen Tripura doing great as a separate State. Tripura after being separated as a State has seen drastic evolution. The same thing can be expected from Barak Valley as well. The advancement of Tripura as a State can be positively perceived as a precedent.

1) The other states of Northeast after being separated have not seen much of a difference in a constructive way. Barak Valley too might not be benefitted from its independence and on the contrary might suffer even more hardships and challenges.

3) There will be unnecessary tension between Hindu and Muslim population of the Valley. There will be protests rife in the air of both the Valleys which will be difficult to handle initially.

4) The self-sustaining capability of Barak Valley is highly questionable. Assam itself is heavily dependent, economically, on the Centre, like the other States of Northeast. Hence, in a similar manner, Barak Valley might too suffer financial dependency on Delhi. Barak Valley might rather be over-burdened, financially, after the separation.

5) According to Professor Joydeep Biswas, head of the Department of Economics, Cachar College and a great economist of Barak Valley, the separation of this Valley can be a loss of revenue from mines and minerals. Tea gardens are also not doing well in the Valley, hence, separation can be even more challenging. But, Barak Valley might have crude oil as a natural resource to its advantage, if separated.

The author of this article, Prothama Dutta Roy is a law graduate from Symbiosis International University, Hyderabad. Presently, she is practising law under Advocate Dipak Deb, former government prosecutor of Cachar District Court. The views expressed in the article are her personal opinion.