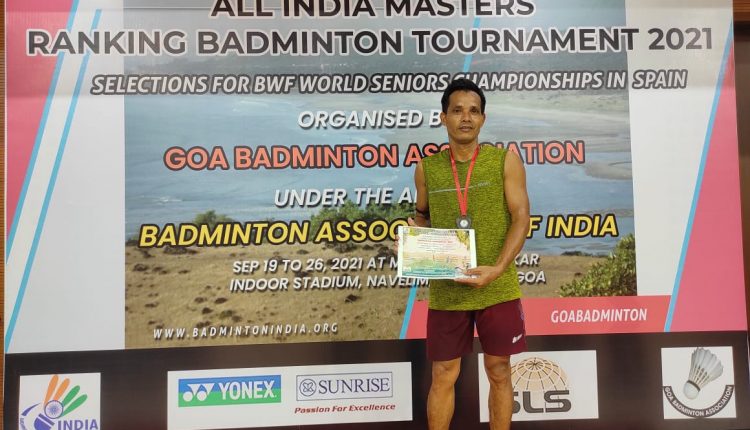 Will financial crisis take away Jagajyoti Rajkumar's chance of participating in World Badminton?

Jagajyoti Rajkumar, a badminton player from Silchar had delivered an outstanding performance last moth in an tournament held by Goa Badminton Association ( All India Masters Ranking Tournament). Jagajyoti thus qualified for BWF’s world senior championship, which is to be held in Huelva, Spain from November 28- December 4 this year. This is the second time Jagajyoti is representing India at a international stage. Earlier He has represented India in Malaysia. Jagajyoti will be competing in the category of 45 years or above in Spain this time.

This is a moment of pride for the sports bug of Silchar and entire Barak Valley. But financial constraints creating a hurdle for Jagajyoti to participate in the upcoming event in Spain. Now the scenario is if the required money is not managed within first week of November, Jagajyoti might not be able to participate in Spain. Jagajyoti, for one, has to manage finance in order to participate in the event, despite of the fact he will be playing under the banner of Badminton Association of India.

Badminton association is not assisting Jagajyoti in this, He needs atleast two lakh rupees to participate in BWF’s event, and which is hampering his preparation.

Jagajyoti had started his practice session right after the day he returned from Goa, he is practicing in two sessions daily. He is also doing gym to keep his physique in shape. But as the BWF event is approaching he is getting more tensed, he couldn’t able to make up the required money so far.

This sort of opportunities are very hard and rare to get, Jagajyoti literally had to deliver his best up to the potential, but now everything is uncertain because of financial constraints. Jagajyoti has to board the flight from Delhi on November 24 for Spain, this year total 4 shuttlers from the state are set to participate in the World Championship, this is a record itself.

India is going to Spain with a formidable team, even the practice and preparation require a good amount of money. Jagajyoti is practising with S 2 shuttlecock in India Club’s indoor ground. The championship will be played by S 5 or S 15 cocks. A single S 2 flower costs about 200 rupees. ‘Practicing with S 2 cocks can be comparable with S 5 or S 15, so I’m warming up with S 2,” said Jagajyoti.

But, astonishingly, even if the players are playing under the banner of Badminton Association of India (BAI), the players have to bear their own expenses. Assam Chief Minister Dr. Himanta Biswa Sharma is one of the higher officials of BAI, he is also the chairperson of Assam Badminton Association. Even then Jagajyoti is toiling to gather money for the championship. Many have raised the question but no-one is actually expanding helping hand.

At this situation, Cachar Masters Games has stood by Jagajyoti. The president of the organisation, Chandan Sharma said that they are trying to collect the money for Jagajyoti.

"DSA's committee is unconstitutional, illegal" Silchar MLA; "All memberships were…