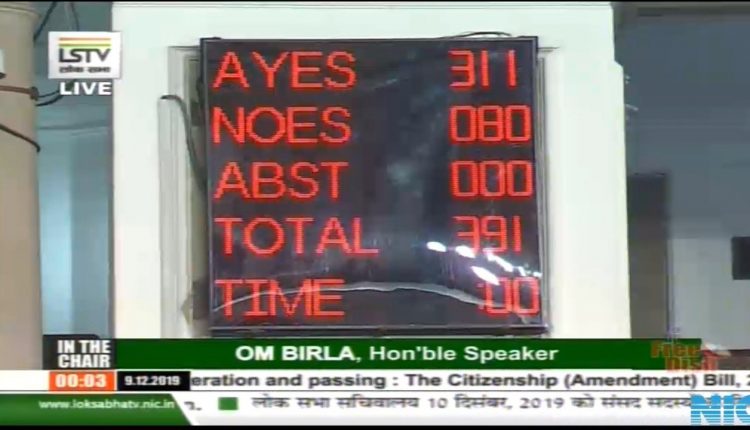 After the seven hour long debate, the Lok Sabha on Monday midnight passed the Citizenship Amendment Bill with 311 votes in its favour and 80 in against.

Home Minister Amit Shah who introduced the bill in the Lok Sabha, said the six communities- Hindus, Jains, Christian, Sikhs, Buddhists and Parsis from Bangladesh, Pakistan and Afghanistan faced discrimination and religious persecution and they have no place to go except India.

“There is a difference between a refugee and an infiltrator. Those who come here due to persecution, to save their religion and the honour of the women of their family are refugees and those who come here illegally are infiltrators” Home minister Amit Shah said while speaking on the bill in Lok Sabha.

Reacting to the passage of the bill, Prime Minister Narendra Modi in a tweet said “Delighted that Lok Sabha has passed Citizenship (Amendment) Bill, 2019 after a rich & extensive debate. I thank the various MPs and parties that supported the Bill. This Bill is in line with India’s centuries old ethos of assimilation and belief in humanitarian values”.

He further added “I would like to specially applaud Home Minister Amit Shah Ji for lucidly explaining all aspects of the Citizenship (Amendment) Bill, 2019. He also gave elaborate answers to the various points raised by respective MPs during the discussion in the Lok Sabha.”

Protests, Strike against CAB in Barak Valley; In pictures

After a successful demo class with Abhilash Baranwal, IAS; CSAP gears for another one…

No stay on CAA: Supreme court