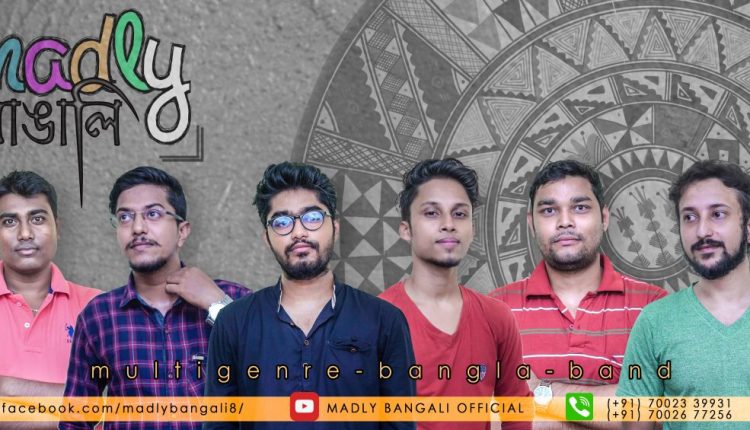 When Madly Bangali released their tribute-song Ager Bahaduri just before Durga Puja, they made one thing clear that the song was not just a puja-song. This is why, after getting immersed into the grand festival, as we return to normalcy in life, this tribute song can be listened to all over again.

Ager Bahaduri is a Bengali Baul song by Baul Maestro Shah Abdul Karim. This song was recreated by Madly Bangali in the form of folk-fusion. In doing so, the six-piece band’s experience of dealing with the genre since 2014 has flourished fully. This is the second release from the oeuvre of Madly Bangali after “Khyepa Shiber Gaan” which was released last year.

The bulk of contemporary folk here is consisted mostly of rock fusion. In this case, Madly Bangali is not an exception too. In the beginning of Ager Bahaduri, Debasish Dey sets the tone with keyboard and the song gradually gets filled with enchanting electronic guitar picking with light percussion. Just when a proper intro-mood is created, Adib Emon’s vocal enters and it sounds so timely at that moment. Soon, the song takes off with background guitar riffs by Ricky Dutta and drums (octapad) by Milan Das. Dotara, played by Ricky Dutta, compliments the first interlude and its presence all over the song keeps the song bound to its roots. Percussions by Rajdip Chakraborty are used with a lot of variety throughout the song. Sayan Dey plays the bass. Flute by the guest flautist Debraj Das in an interlude adds sheer charm. It is needless to say that the band has come a long way in terms of musical arrangement and knowing how they want to sound.

Ager Bahaduri is a song where the songwriter narrates his old-age problems and how he misses his young age bravery. This realization has been beautifully portrayed by the video that the band released their song with. Debasish Dey comes up with a fitting concept which was aptly performed by the actors from a theatre group called Dasharupak. The video which was shot by Sonicspawn Studios, is available on the band’s YouTube channel. The song is also available on all the leading online music streaming platforms.

In the age of content creators with easy creation tools available, festive seasons see a remarkable upsurge in release of songs and videos of different tastes. As numbers of songs pour in, there are few which stand apart. This year, Madly Bangali’s rich tribute is arguably one of them. As the song inherits the message that now is the best time to do something, let us be hopeful of witnessing more of such all-round productions from this valley.

Peeped through a hole to get a glimpse of open sky: COVID survivour shares isolation…