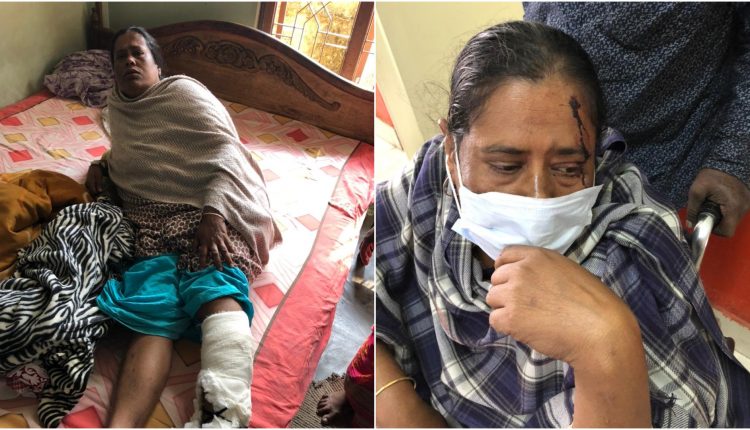 In Uttar Krishnapur area under Sonai constituency, a fight between two neighbours resulted in a sick woman severely injuring her leg. After that, they were kept under house arrest for an hour in a bloody state. Eventually, they were released by the police and taken to the Silchar Medical College & Hospital (SMCH). The family members of the injured woman then filed a case with the Rangirkhari police station. The police could not arrest anyone even after two days of the incident. When the injured woman was rushed to the hospital, one policeman assisted to help her and the family during the ordeal. The family also alleged that the policeman assisting them demanded 500 rupees for having tea and snacks.

The incident that happened on the morning of February 16, left Samir Uddin Laskar, his wife Saina Begum and their son Sarwar Alom Laskar of Uttar Krishnapur injured. According to Sarwar Alom Laskar, due to construction work at home, they ordered some soil by truck. It would’ve been inconvenient for the localites there if they dump soil near the road towards Mizoram Road Highway, so they decided to dump the soil in the back end area. However resident of the same lane named Javed Barbhuiya stopped them from doing so. After a lot of argument, when they were not allowed to dump soil there by Javed and his associates, Samir Uddin dumped the soil near the highway eventually. But even that didn’t stop Javed from getting irked who tried his all to stop them from dumping the soil near the highway, which resulted in a quarrel between the two parties.

However, in the morning of February 16, Javed Barbhuiya and his brothers suddenly came in front of Samir Uddin Laskar’s house and started shoutingly calling him. When Samir Uddin went out to check, he was immediately attacked by Javed and his brothers. This made his wife and son rushing to his rescue, but they too were attacked. At one point, the youths attacked Saina Begum with sticks and stones. Her head got severely injured and after a while, she realised that her ankle got broken. With the help of local people and other family members, they somehow managed to get inside the gate and locked it from the inside. But from the outside, Javed Barbhuiya and his associates kept threatening to not allow the injured woman to go to the hospital. They finally called the police and were taken to the hospital when the police arrived about an hour later.

A localite named Tariq M. said that”Javed Barbhuiya and his associates detained the sick woman in a bloody condition. I am an eyewitness to the incident. When we took them to the SMC Hospital with the help of the police, we were harassed in different ways. But the worst experience is that the police officer who went with us reached us and asked us to give him some money for tea and food. When we offered 100 rupees, he said in return that it’s not enough and asked us to give him 500 rupees instead. He helped us, we would’ve been glad to offer him food, but during tough times like these, by asking for such a hefty amount he has shown us that they’re ready to do anything for money. The culprits are still roaming free in the area. We approached the Superintendent of Police and on his instructions, some officers of Rangirkhari police station have visited the area. However, before even the police could arrive, all of the perpetrators have already fled the scene, meaning that someone informed them that the police were coming. We think there are some people in the department who help the criminals, maybe for something in return. If such is the case, then the perpetrators of the crime will be eventually released and the victim will not get justice. We want this message to reach the department officials so that they can take necessary action.”

Sarwar Alom Laskar is a graduate of the Jorhat Engineering College and is running a small business in his area. He said that Javed Barbhuiya and his brothers often mistreat others by identifying themselves as old native people of the area. However, on February 15, due to their repeated threatening, we informed the police. This irked them and they attacked us which broke her mother’s ankle. Even after that, that kept threatening us in different ways.

Although one side of the incident was known, the statement of Javed Barbhuiya or his family could not be known. We tried to contact them, but couldn’t succeed.