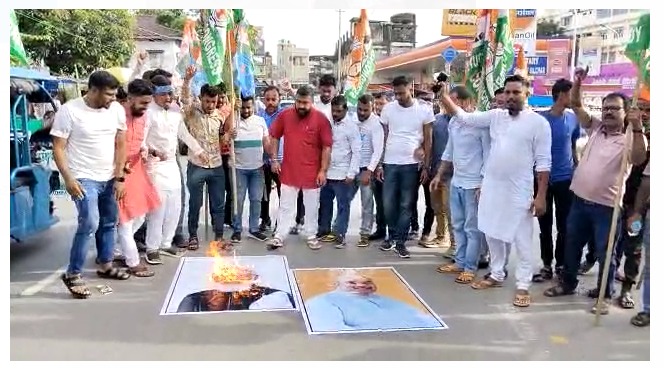 Recently, Youth Congress and NSUI Cachar held a roadblock protest against Rahul Gandhi’s recent detainment. The congress leader, along with several other MPs were protesting GST, price hike and other issues of national importance while Sonia Gandhi, his mother was being questioned by the Enforcement Directorate.

Ranajit Debnath, President of Youth Congress said that “Rahul Gandhi and his team were protesting unemployment and other issues affecting the country. Yet they were beaten and dragged away by the police. We will not tolerate the muzzling of our voices!”

The youth carried out a procession throughout the city as well, shouting slogans such as “Rahul Gandhi tum sangharsh karo, hum tumhare saath hain”. The enraged youth proceeded to burn the effigies of Home Minister Amit Shah and Prime Minister Narendra Modi who they claimed have conspired to muzzle the opposition.

Rahul Gandhi’s detainment is preceded by the suspension of four congress leaders from the Lok Sabha. Recently, Congress Interim President Sonia Gandhi was also called for questioning in the National Herald case.