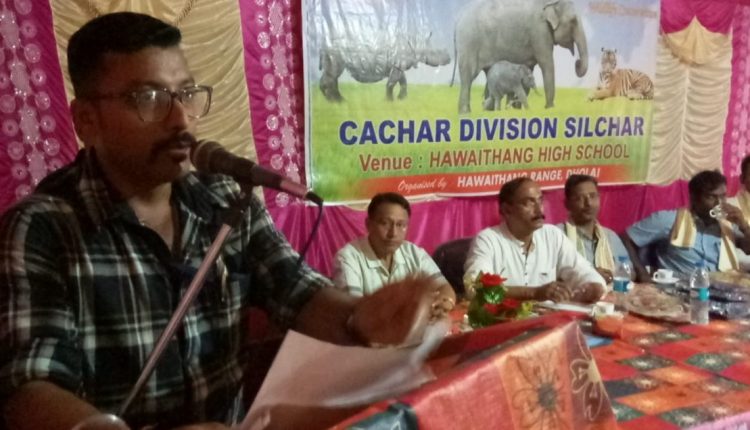 People of Barak Valley can soon see wild animals loitering around in a Zoo and Wildlife Conservation Centre. Touted as the dream project of Parimal Suklabaidya, Forest and Environment, Excise and Fisheries Minister, Government of Assam. On September 3, 2019 the minister himself visited Rajanikhal located in Dholai to inspect the proposed land. Tomorrow a high profile technical team is set to visit the spot.

At an event held at Haithang Higher Secondary School in Dholai, officials of the forest department said the Zoo and Wildlife Conservation Centre project is going to be a landmark moment for Barak Valley. They believe the project will help boost tourism in the region. They informed that once the technical team visits tomorrow they will check various technicalities and once that gets approved the construction work will begin.

Talking to the media, CCF Suman Mohapatra said that it’s a dream project for the forest dept. He was of the opinion that the Zoo and Wildlife Conservation Centre will manage to rescue many local endangered species. He also added that a centre like this generates awareness among the mass which makes them behave in a more nature friendly manner.

DFO Cachar Sunny Deo Choudhury credited the minister for his hard work. He said that Suklabadiya is personally involved in this project and is not leaving any stone unturned. “The zoo is going to be built at Rajanikhal area, the technical committee is coming to survey the land. Minister himself is in discussion with senior officials to ensure everything is done smoothly,” he added.

He was asked by the media if the department bulldozed encroachment a couple of months back to vacate land for the construction of the Zoo. The DFO said the two are not linked. He added that the zoo is being built in a different section of the Rajanikhal village. “We will continue conducting eviction drives to free forest department’s land from any sort of encroachment,” he asserted.

Engines took more than an hour to reach Chotojalenga; victims demand a fire station near University