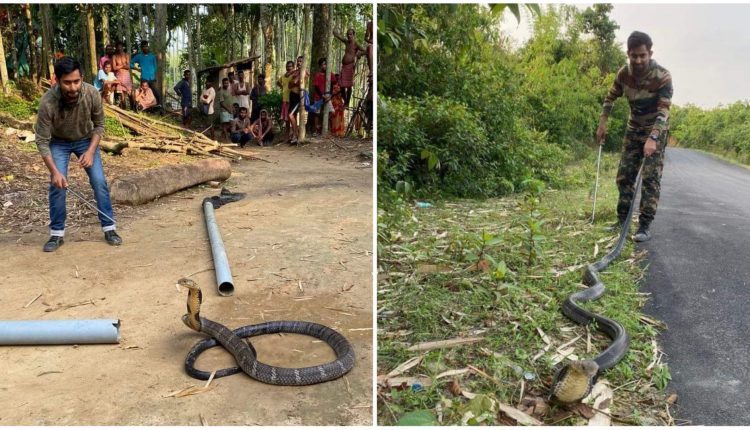 Having grown up in the suburbs of Karimganj, Bishal had seen snakes since childhood. Bishal Sonar has a Master’s Degree in Ecology and Environmental Science from Assam University. Growing up Bishal didn’t think his life would revolve around animals or snakes either. Among the many creatures that co-exist in our common biodiversity, snakes are probably the most feared and revered at the same time. There are myths and mythology associated with these reptiles and that is why a section of people fear hurting them at any cost. Most snakes are venomous but there are many which are not and are quite harmless. Bishal Sonar is now a wildlife rescuer who dares and rescues snakes and other wildlife almost daily.

The recent flooding in Silchar Town and other areas of Barak Valley has increased the number of snakes in urban areas as well. Many people have reported that snakes along with snake eggs got trapped inside their buildings. Flooding has also increased fishing activities. There have been two such incidents of fish being trapped in fishnets and one resulted in the death of the fisherman. This has increased the number of distress calls for snake rescue. Bishal Sonar is part of a team that has experience in rescuing snakes with a 100 percent success rate. Recently he along with his team has rescued several non-venomous snakes from Silchar areas, where snakes are generally not encountered that often. Common wolf snakes, Indian rat snakes and black krait were mostly encountered and rescued by Bishal in recent days from the urban centre. 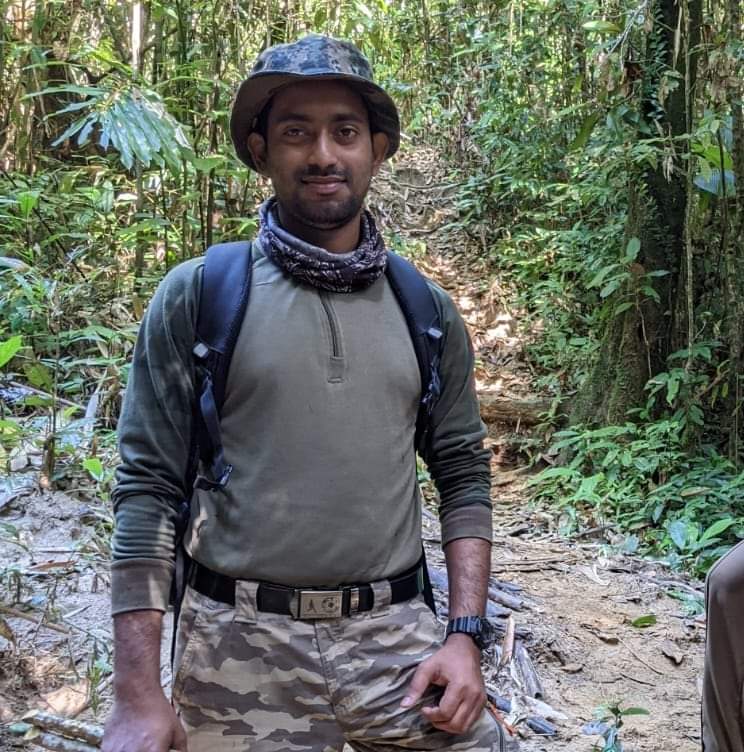 Bishal got attracted to snake rescue while studying Ecology at Assam University’s School of Ecology and Environmental Science. Bishal says, “I’ve grown up in nature and as an academic subject, I’ve been studying the ecology and environment for the last seven years, from the time of my graduation. I think I always had this knack towards nature and when I got an opportunity to rescue, I just jumped for it”. It’s not just snakes that Bishal is fond of but since snake encounters are reported the most in Barak Valley, that’s how he got the badge of a snake rescuer which he proudly wears. 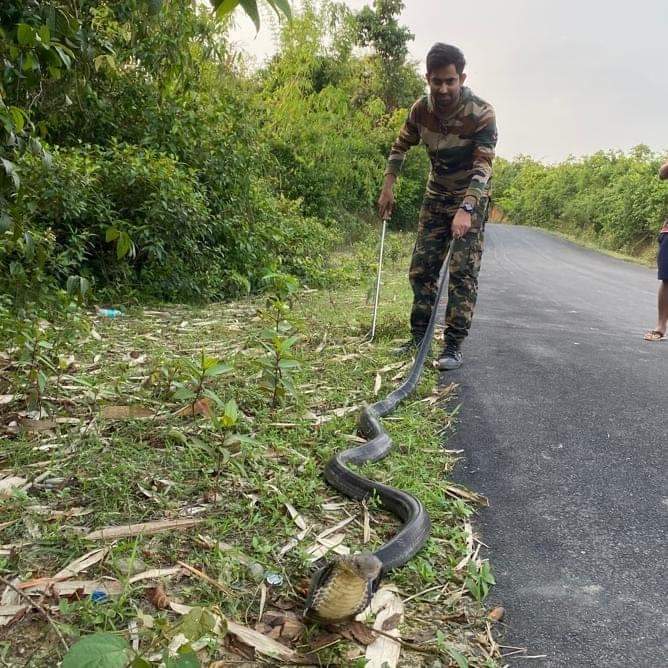 Before his first snake rescue, Bishal had learnt in detail about these reptiles and had heard about personal experiences from his seniors. First, he started by accompanying his seniors Sumit Nath and Biswadeep Sinha, on their rescue mission and that’s how he gained his field experience. It was two years back in 2020 when Bishal first caught hold of a snake in Irongmara. Speaking about this encounter Bishal says, “One day when my seniors were not available for rescue, they called me up and asked if I’m up for it. They said it was a pit viper, a highly venomous snake. I was skeptical at first as I’ve always assisted them but my inner calling led me to the encounter ground. To my luck, it was one of the easy rescues, probably because the snake wasn’t disturbed and was not in a bad mood”. This first “easy rescue” gave a huge morale boost to Bishal and since then, there was no turning back for him. 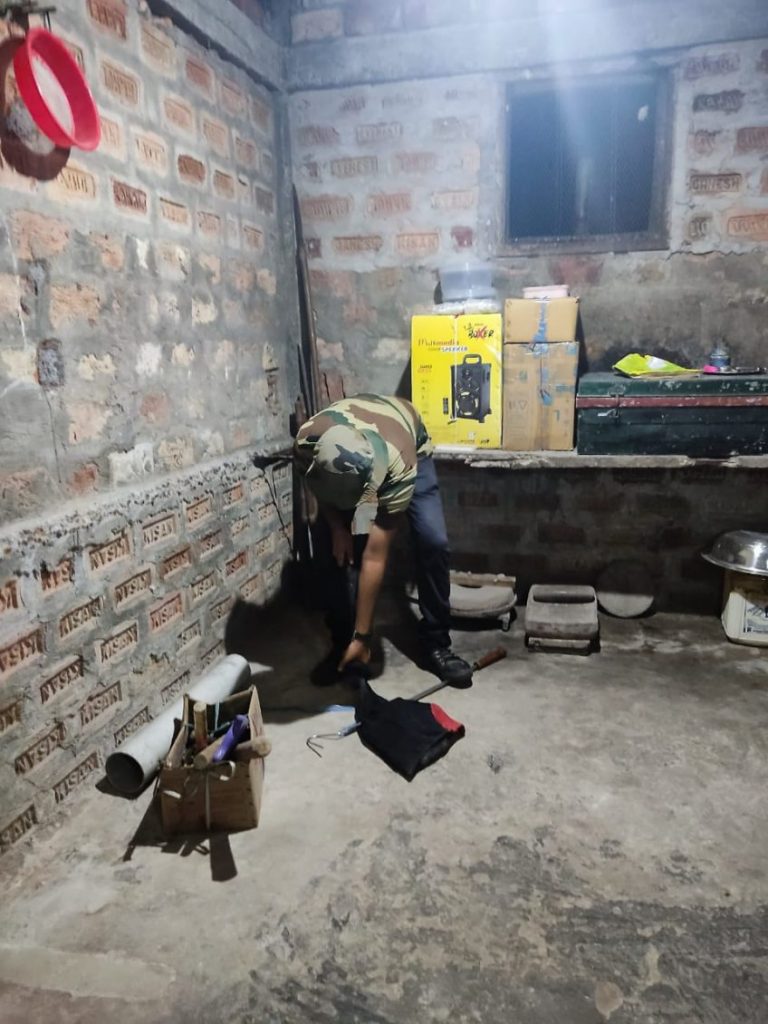 There is no direct training for snake rescue, whatever Bishal has learnt is from his academic texts and he says it was “mostly theoretical knowledge”. Most of his practical knowledge was passed on from his seniors while he assisted them during rescue missions. He advises people without proper knowledge, not to attempt such stunts because it has proved to be very dangerous. The initial step, Bishal says, is to identify the snake and understand the mood before attempting any rescue. Many people who don’t have professional experience or knowledge die during rescue due to snake bites and poisoning.

This is not a very easy line of work. There is risk involved daily. It’s a difficult task to understand the mood of these reptiles and when venom is involved, it becomes even risky. Fortunately, Bishal never had to face any risky situation where he was attacked and that is because of his knowledge. Speaking about this he says, “I’ve even rescued most venomous snakes like a king cobra and black krait among others, but I’ve been fortunate enough with God’s grace to rescue all of them safely. This demands huge patience and sometimes we even spend 5 to 6 hours rescuing a snake. It all depends on their mood”.

Explaining the process further our young expert says, “Technique is very important in any snake rescue, be it venomous or non-venomous. I can recall one incident from a few days back, I rescued one king cobra and it hardly took me two minutes. So far it was the safest and easiest rescue for me. But on the other hand, there have been days when the same king cobra rescue becomes the most challenging. What happens is that, before we can reach there, people tease the snake and disturb them. This ruins their mood and even after hours of trying they wouldn’t come under control. This takes time and makes it difficult”.

There is no snake left in the valley that Bishal has not rescued. Among the most venomous snakes, he has rescued king cobra, monocled cobra, pit viper, banded krait, red-necked keelback, ornate flying snake and the list goes on.

Bishal works through the Wildlife Conservation Lab of the Department of Ecology and Environmental Science of Assam University. They have a team of four who are involved in snake rescue missions. Bishal is currently preparing to get a job in the line of Ecology and Environment conservation because Bishal feels responsible, being an ecologist he should always remain connected to this field. Bishal describes himself as an ecologist, wildlife rescuer and social worker.

Congress rewards rebel Ranajit by making him president of Youth Congress; Will he…