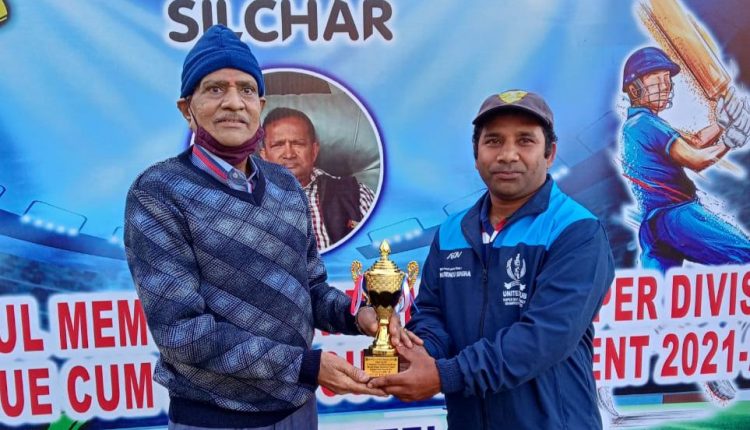 The mighty India Club that just won the Assam Premier Club Cup – Silchar Chapter is struggling to find its foothold in the ongoing Super Division tournament organised by Silchar DSA. Today, India Club suffered its third consecutive defeat after going down to defending champions United Club. On the other hand, United Club bagged first win of the tournament making the race for the semi-finals even more interesting.

After winning the toss, United Club captain – Masarob Hussain Laskar asked India Club to bat first. Parvej Musaraf, one of the star batters for the India Club last season, got them off to a flyer. He scored a classic knock of 80 runs and was well supported initially by Pradeep Sarkar (24). However, India Club could not capitalise on the start they got, Arman Khan (7), Prashant Kumar (3) were dismissed cheaply. Captain Raihan Jomeel Mazumdar (21) played a slow inning which took the momentum further away from the India Club despite having wickets at hand. Govinda Rajbangshi (23) tried to accelerate the scoring but they could only manage to put 205 on the board. United Club conceded 32 extra runs. Dibakar Johori picked up two wickets. Masarob Hussain used eight bowlers and four of them picked one wicket each.

Chasing a decent total, openers Sukanta Dey and Ambar laid the foundation with a century partnership. With 106 on the board, Ambar (45) lost his wicket. Dey went on to score 74 runs taking the team closer to the win. Masarob Hussain dropped himself to number three and scored 15, but Prasenjit Sarkar’s 14-ball 24 run innings shifted the momentum towards United in the closely contested battle. Sanjib Dutta also played a critical inning in the end and took the team to the total with three balls to spare.

For his match-winning knock and picking the important wicket of Raihan Jomeel Mazumdar, Sukanta Dey was adjudged the man-of-the-match.

With this victory, United Club moved up to the fourth position in the table. India Club finds itself at the bottom of the table which means, the team can get relegated to the first division. Itkhola AC has already qualified for the semis after winning four out of their four. Town Club has also qualified with three out of three wins. Tribeni, United and Yogayog are all at one win while India Club is yet to open the account. Four teams will qualify and the race became more interesting.