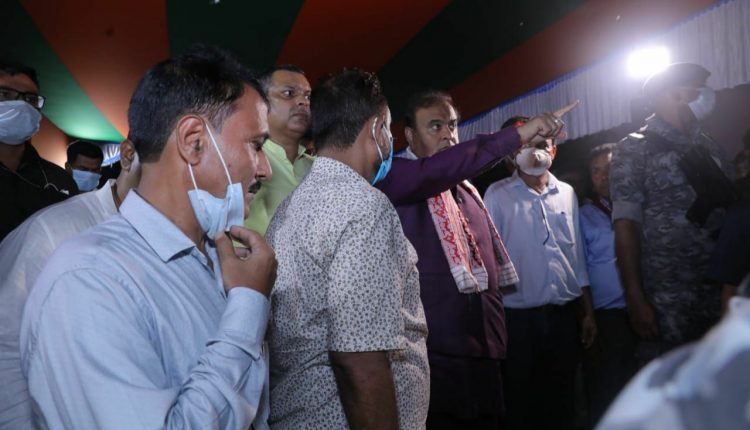 Cachar is one of the worst-performing districts when it comes to the completion of under-construction work. This is due to several political and administrative failures, Cachar has such a horrible reputation. The people’s representatives leave it for the bureaucrats to solve and the processes keep getting delayed.

There are three bridges in Cachar which are completely ready but non-operational as approach roads have not been built. The situation has remained the same for the last five years. Chief Minister of Assam, Dr. Himanta Biswa Sarma wants to correct that.

Yesterday, between his Durga Puja pandal hopping, he went to Annapurna Ghat and inspected the work in progress of an RCC bridge over river Barak connecting Dudhpatil of Borkhola to Silchar town benefiting around 60,000 residents. Most of them use the ferry to commute which the CM termed “risky.”

“I have inspected the work in progress and as per my estimate, we should be able to finish the construction by July 2022. This is a very important bridge and I have spoken about it with the deputy commissioner. There were some issues regarding land acquisition due to which we had to face a delay. As I have been briefed, the fund for land acquisition has already been sanctioned and so the issues must get sorted soon,” said chief minister Sarma at Annapurna Ghat.

He also went to Kathal Road to survey a plot of land proposed by the district administration for the construction of an integrated Deputy Commissioner’s Office. “Yes, I have seen some land. We are trying to expand the town and so, we will construct the integrated DC’s office at a good location,” said Sarma without revealing if any plot has been finalised.

He continued his Durga Puja pandal hopping throughout the day. He has also visited the residence of Minister Parimal Suklabaidya as Durga Puja is organised at the latter’s house every year.