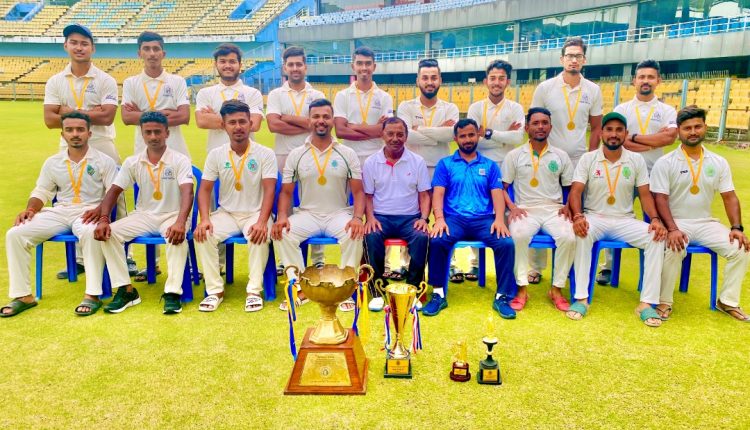 Silchar the champions of Assam; Samik, Rahul, Abhishek and team becomes a part of the glorious history

Silchar marked a history in the field of cricket. For the second time Silchar bagged Nuruddin Trophy Senior Inter-District Tournament to their name. Shamik Das, Rahul Singh and co. conquered the trophy this year with dominance.

Silchar secured the victory on the morning of third day, however the platform for the victory was set up on the second day, the match was played at Barsapara stadium in Guwahati. Silchar beat Biswanath Chariali by 10 wickets in the final match of Nuruddin Trophy. And as expected, middle order of Chariali didn’t last long infront of Silchar’s furious bowling line up.

Bishwanath Chariali started the day with 90 for 4 on board, lagging 11 run behind Silchar. Chariali’s could add only 50 runs and their innings ended on 140 run. Ram Das performed brilliantly with bowl for Silchar and took a fifer. His bowling figure stands at 18-12-15-5. Rahul Singh took three in the second innings, he took total seven wickets in the final. Captain Samik Das also picked up two wickets.

Silchar coach Rajib Das is elated over the win, for him it is the teams collective effort that has brought them the victory. “I think this is a historic moment for Silchar. They have showed their temperament, and what is most significant is that they played as a team, showed team spirit,” coach Rajib Das said.

Silchar coach said he was emphasising on team spirit since zonal stage, he conveyed the message to the players that everyone has to contribute to the team.

” I told them during the zonal level tournament in Karimganj to put team’s interest over personal interest. And that has worked,” Rajib Das told.

Team Silchar was able to reflect the team spirit in their performance in this tournament, especially in the final round in Guwahati. Subham, Amit and Jaydeep Singh had played crucial role with bat in the match against Tezpur in semifinal match, and Rahul got nine wickets.

Pritam and Jaydeep again built up a crucial partnership against Tinsukia in tremendous pressure. Rahul had again displayed his extraordinary skill with bowl again in that match. Sanju Brahmma and Jaydeep Singh hold the steering in the final.

Silchar had won the first Nuruddin Trophy during 2007-2008 under the captinship of Prakash Bhagat. Silchar had again qualified for the final during 2012 season but couldn’t not win it. Shamik Das is only the common member who was part of 2007-08 winning team. Pritam Das lead the team of Silchar this time till the match against Tinsukia, then from semifinal onwards Samik was given the duty of captaincy. This is a special moment for Samik too. “I can’t express it with words what I am feeling now,” said Samik Das after winning the match.

” I was part of the team that won first Nuruddin Trophy in 2007-08, this time I am the captain of the team, what else could be more satisfying than this ?” Samik told. “Sanju knows how to win trophies, he has won it for Guwahati already, he has played accod9 on this match too, and his knock made the difference between two teams

District Sports Association has also overjoyed with Silchar’s performance. They have been congratulating each other and the team members. Babul Hore, the president of DSA congratulated the team. Secratary Bijendra Prasad Singh, cricket secratary Niranjan Das have also conveyed congratulatory messages.

A grand reception will be organised for the champion team, informed Bijendra Prasad Singh. Silchar team will be coming back by road on Thursday. The team will visit the Silchar station and will pay tribute to the language martyrs on that day. There will be refreshments and on Friday evening there will be a grand celebration in the DSA conference hall.