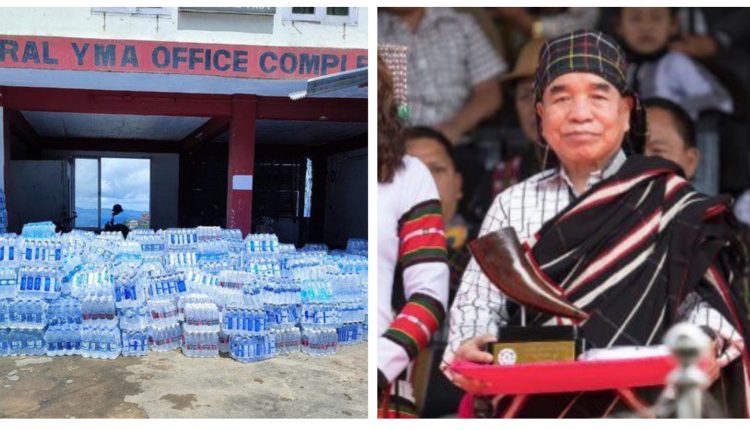 The ones who drive Audi and Volvo were pleading with folded hands for a bottle of water. Their narrow lanes were submerged and the boats could not enter. ‘Relief’ they cried and cried again for hours after hours. Willing to help, the youth, the administration, the fraternity stood and stared helplessly. Eventually they dared and risked their lives and found boats to start reaching out to the needy.

The chief minister of Assam, Dr. Himanta Biswa Sarma announced one lakh bottles of water will reach Cachar by air everyday. Khalsa Aid, India Cares and many other such national NGOs started transporting supply from various parts of the country.

Rising up to the occasion, Zoramthanga, the chief minister of Mizoram stretched out his helping hands,. He gave a warm send off to the team that was headed towards Silchar with relief items.

“The Central Young Mizo Association are on their way to deliver drinking waters to our neighbouring #AssamFloods2022 victims. The Govt. of Mizoram will ensure all possible help from end. Mizoram will always be with #Assam in this trying time,” tweeted the chief minister of Mizoram arguably, the most hated in Silchar.

11 months back, exactly on the same day, his armed Police Force opened fire at Assam Police during an inter-state scuffle at Lailapur. The blitzkrieg from hill-top killed six Assam Police personnel and 43 other including the Superintendent of Police, Cachar were admitted to the Silchar Medical College and Hospital with bullet injuries. Zoramthanga or his ministers never apologised or even expressed condolences at the death of the Assam’s men in uniform. The post where the Assam Police personnel were killed remains in the custody of Mizoram. For the Mizoram, they had just saved what they believe is their territory.

However, the water bottles driven to Silchar through the same path has worked as some ointment on deep wounds. People of Silchar have appreciated the move. The Cachar district administration ceremoniously received the consignment though it had abundance of supply in its disposal. It is not about the supply, but gesture.

The team from Mizoram have been distributing the supply in various parts Sonai Legislative Assembly Constituency. Yesterday, in Das Para area of Sonai, one truck carrying the supply apparently collided with a parked two-wheeler. According to the statement of the Mizo delegate distributing relief, the locals attacked the truck and damaged it following the collision.

As things started to heat-up, the Sonai Police station moved into action and restored peace. Both the parties were summoned to the Police Station and one Raja Das was detained.

As a mark of respect to the gesture of Mizoram, instead of treating this as any other accident, Cachar SP, Ramandeep Kaur herself visited Sonai to look into the case.

She said, “There was a verbal altercation following an accident. But to ensure that the ones who are stretching their helping hands must be respected and their dignity is not compromised, we are taking all necessary actions.”

SP Kaur added, “One person who was involved in the verbal altercation has been detained and we will proceed the investigation as per law.”

Again, the gesture from Cachar SP to an otherwise innocuous incident is significant. Her visit, all the way to Sonai crossing the submerged roads sends across a message of care and respect to Mizoram.

Overall, even if it is after 11 months, the initiative from Zoramthanga and his government during the Silchar floods definitely comes as a progressive step towards mending the relationship.