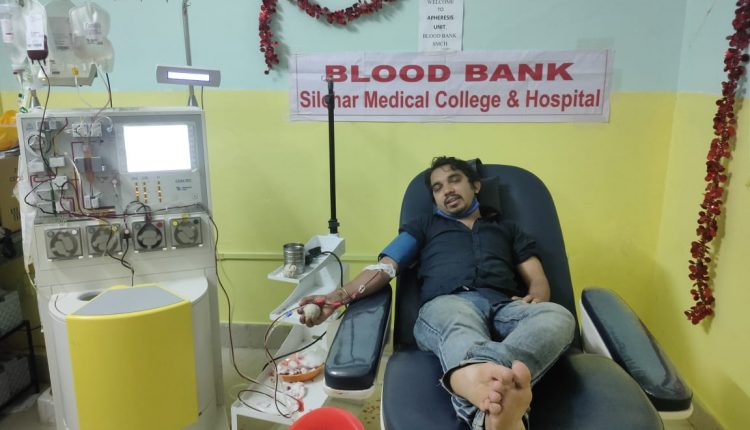 The use of convalescent plasma (CP) collected from previously infected individuals to passively transfer antibodies in order to protect or treat humans is an age-old technique that has proved to be a life savior in this Coronavirus-induced pandemic.

The plasma therapy centre at Silchar Medical College and Hospital became operational from August 3, 2020, onwards. Since then 130 donors have donated plasma and 244 patients have undergone Convalescent Plasma Therapy. Symptomatic patients from the three districts of Barak Valley are treated at SMCH. Critical patients from Dharmanagar and Dima Hasao are also referred to the Hospital in Silchar.

Considering the scale at which it operates, 130 donors is still not up to the mark. However, plasma bank in SMCH ranks second in Assam after Guwahati Medical College and Hospital.

Of the 130 donors, two have donated plasma twice. Today, journalist Biswa Kalyan Purkayastha became the second donor to do so in Barak Valley. The first was Nabidul Islam.

Purkayastha got a call from the plasma bank earlier today. “They had told me that there is a requirement for AB negative plasma. I volunteered to donate for the second time,” said Purkayastha.

He added, “Even if there wasn’t a requirement, I would have voluntarily donated. After my first donation, Dr. Bhaskar Deb Nath had told me that if eligible, I can donate again after 15 days.”

Today, the antibody count was tested and Purkayastha was deemed eligible to donate one more time. He is at the plasma bank donating antibodies for the patient in need.