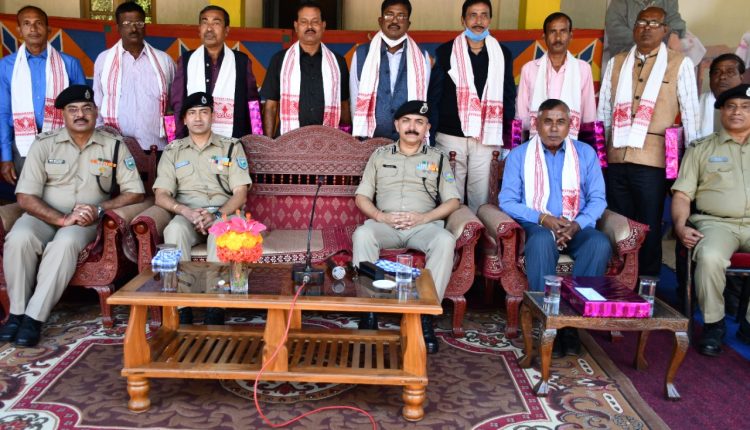 December 1 is the foundation day of the Border Security Force (BSF) – the premier infantry force that guards India’s international border in LOC with Pakistan and Bangladesh. This year BSF would be celebrating its 57th Foundation day, as on this day in 1965, the paramilitary force that patrols India’s land border during peacetime and in conflict.
The 57th foundation day is being observed throughout the country with different activities and events. The week-long program of the BSF 07 Battalion, which is deployed in Karimganj along the Indo-Bangla border, is going to complete on the day of foundation, December 1.

On Tuesday, BSF 07 battalion observed their foundation day at the district headquarter in Maijhdhi, Karimganj with day-long cultural events. All veteran BSF Jawans and Officers of Karimganj District were invited to the program.
Journalists and other delegates from civil society were also invited to the event. A BSF Band led by Inspector Sanjit Kumar performed in that event. Another team staged a Punjabi Bhangra dance, which mesmerized the spectators at the event. BSF 07 Battalion commandant Vikram Singh addressed the event and spoke about the history and glory of BSF. “BSF came to being on 1st December, 1965. BSF has been serving the nation for 56 years, and the motto of BSF is ‘stand up to responsibilities, even death is the outcome.’ BSF has maintained this tradition,” said Commandant Vikram Singh.

“BSF jawans will not move an inch even while he is facing the wrath of enemies in bare hands,” he added.
BSF Second in command Pankaj Soudh, Adjutant Sushik Kumar Upadhyay, Deputy Commandant A.C. Mondal was present at the event among the BSF executives.

BSF is regarded as India’s first line of defense. BSF had played a major role in the Indo-Pak war of 1971 which liberated Bangladesh. It is the world’s largest security force with 250 thousand personals and 186 battalions. BSF has the world’s largest female regiment. BSF is also extending its support to many social works besides providing security. During disaster and during COVID Pandemic BSF 07 Battalion had been doing many social service campaigns.