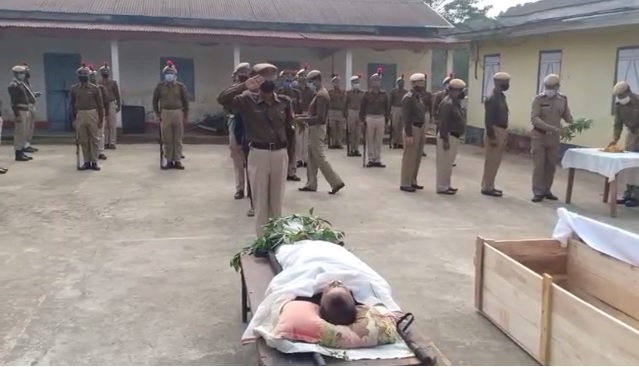 At 15th Assam Police (IR) Battalion Headquarters in Eraligool, Karimganj DSP Shyamaprasad Chakraborty was found dead lying in his own quarter. According to available information, DSP Chakraborty was not opening the door in the morning and that is when his colleagues broke into the quarter and found him lying on his bed.

Doctors were called and they diagnosed him dead. The sudden demise gave birth to many speculations. Some alleged that the DSP died in mysterious conditions. However, the superintendent of Karimganj Police, Mayank Kumar ruled out any such speculations.

“There is nothing mysterious as far as we have found out,” asserted Kumar. While speaking with Barak Bulletin, he said, “He died due to stroke during his sleep.”

DSP Shyamaprasad Chakraborty was living alone in his quarter and that is why his colleagues only noticed it in the morning. His sisters were informed about the demise of Chakraborty and they rushed to the headquarters in Eraligool.

The body was sent for postmortem. Once the medical process was conducted the officers at the headquarters paid respect to the DSP with a gun salute and then handed over the body to the family members.

The sudden death of a DSP rank officer has left the fraternity in a state of shock.