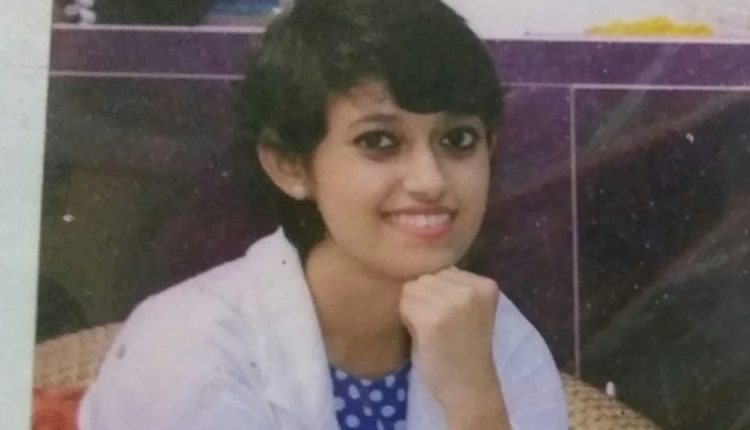 A very talented young girl from Silchar, studying in one of the top colleges in India committed suicide. Piyali Dey, daughter of Santosh Dey, a resident of Public School Road Silchar, was a final year student studying at the Schools of Planning and Architecture located in Bhauri, Madhya Pradesh.

Late Saturday night – early Sunday morning, she was spotted lying on her bed in her hostel room. Officer-in-charge of Khajauri Police Station while speaking with Barak Bulletin said that her hostel-mates knocked her door several times but she did not respond. He said, from what he gathered so far, students peeped inside the room through the keyhole and saw her lying on the bed motionless. The door of the room was then broken and she was immediately rushed to the nearest hospital where she was declared brought dead.

“We have found a cylinder, a gas pipe and a nozzle in her room. With what we have gathered so far, we can confirm that she has committed suicide. It looks like she has used an argon cylinder which she herself ordered from an e-commerce platform. She swallowed the pipe and turned on the regulator which disturbed her respiratory system and thus she died due to lack of oxygen,” Mishra informed over a telephonic conversation with Barak Bulletin.

As per the police officer, she left behind a suicide note which stated that she was done with her life and decided to end it by her own choice. The police official also informed that three months back she met with an accident in Goa and had to undergo a knee surgery, “What we have gathered from the medical reports and after talking to her friends, she was really disturbed following the accident and was suffering from both medical and mental issues,” said Mishra.

Her father, while speaking to our correspondent said that he is shocked and never expected Priyali to do something like that. “She has always been a little introvert would hardly speak with people. A day before the incident I spoke with her, never imagined that would be the last time…” said Santosh Dey.

He added that a couple of days back, she had complained to her elder sister about getting lesser marks in the group assignments. “She said she was not able to communicate properly in the group and that is why she was getting lesser marks. My daughter has always been a top scorer in studies and whenever she got a little less than expected she lost her head,” added Dey.

After the postmortem, her body has been handed over to Aditya Dey, Piyali’s cousin brother. The family informed that the body will reach tonight as they have already crossed Shillong by road.

Till standard eight, Piyali studied in Vivekanda Kendriya Vidyalaya and after that, she moved to Maharshi Vidya Mandir. Her family and neighbours are still in a state of shock.