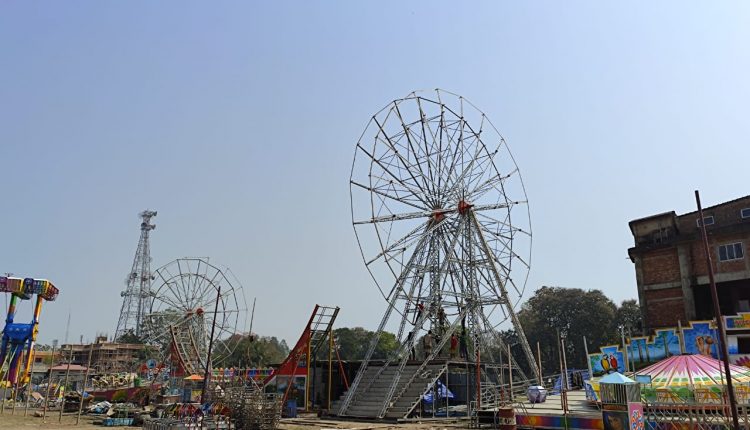 Due to the Corona pandemic, Silchar’s Gandhi Mela as well as the other two traditional fairs from the other districts in the Barak Valley has been called off. But despite this setback, a non-governmental fair the size of Silchar Gandhi mela is to be organized thus bringing new hope.

The organizer of this fair is D K Enterprise from Guwahati, who takes part in the annual Gandhi mela every year. The fair, which is named Disneyland Mela, has gotten permission from the authority to be held in the Gandhi Mela ground for 15 days. However, Assistant Deputy Commissioner (ADC) Rajiv Roy said that if the conditions remain stable and normal, the duration of the fair might get extended in the coming days. Silchar MP Dr. Rajdeep Roy will join as the chief guest of the inauguration event of the Disneyland Mela, which is scheduled to start on February 26.

The last edition of Gandhi mela last year was abruptly called off midway due to the spread of the Coronavirus infection, followed by the nationwide lockdown. Traders from West Bengal, Bihar, Tripura and other parts of Assam who had come to the fair got stuck here.

Nevertheless, when they somehow managed to get back to their home states at a later stage, they did so by having to leave all of their products and belongings here for almost a year. Even after incurring losses worth lakhs of rupees, the preparation of this mela has begun with newfound excitement. The ground adjacent to the Annapurna Ghat is being decorated with gigantic Ferris Wheels (Nagordola), Pendulum ships, Break Dance, etc. Also, many different shops too are getting set up in rows in the middle of the mela ground, which is already been joined by more than 100 traders coming from Bihar and West Bengal. The local traders too are joining this grand carnival, which has come as a relief to the people of Silchar after much delay and confusion regarding the same.

On behalf of the organizers, Babla Banerjee, Bejnath Roy, Swapan Kumar Dey, and Mukhtar Alam gave their statement regarding the preparation of the Mela to Barak Bulletin during an interaction on Tuesday. They said, “The mela got called off abruptly last year and even though we tried, we couldn’t save ourselves from the losses that we all incurred. Traders from different regions that came to participate in the mela all got stuck here and their goods got destroyed in the process. Then this year the Gandhi mela wasn’t organized which hurt us all. Then we decided that we would organize another mela at our own initiative, to which we appealed to the District administration. The eventually agreed, but not without clear instructions on Covid protocol to adhere to. We still don’t know if this initiative would reap us any profit but whatever losses that we incurred last year, if we could recover at least a portion of it through this event, still it’s a lot for us. Besides, to conserve the annual mela tradition that has been going on here for decades, we are organizing this fair.”

Paramananda Giri, a trader from Bihar’s Champaran, visits Silchar every year to participate in Silchar Gandhi Mela. Similarly, around 60-70 traders from his region participated in the mela as well. Last year, they faced a lot of trouble after coming here to participate and incurred huge losses as well. Even after all this, they couldn’t refuse the chance to come here again at this year’s mela in Silchar. While expressing his feelings, he said, “It’s been quite long that I’ve been participating in the fairs of Barak Valley including the Gandhi mela. Not just because of financial gains, it has become an emotional attraction as well. Last year, Silchar was not the only place that got affected by Corona, the entire world got affected by it. Hence, we are not blaming anyone for this. This time, we are participating in the mela with newfound enthusiasm and hoping that the circumstances don’t end up like last year. If people turn up with enthusiasm and buy our products in the mela, then I don’t see any chance of this mela getting called off in the future as well. However, despite having all the excitement, we still are participating with some level of risk.”

On behalf of the district administration, ADC Rajiv Roy said, “The organizers have appealed to us and 15 days have been granted to them. In no way, the Covid protocols should be flouted, we made it very clear to them. They even requested to extend the duration of the mela but that’s still in discussion. If Covid protocols are maintained and not too much gathering is observed, we might give it a thought about extending the duration of the fair by a few days.”

During the aftermath of the lockdown period, people have had wedding ceremonies, cultural events, then why not organize mela as well by adhering to Covid protocols? A few traders have appealed to the SMB seeking permission to organize a mela through private initiative, to which, it seems the Municipality has given a green signal.