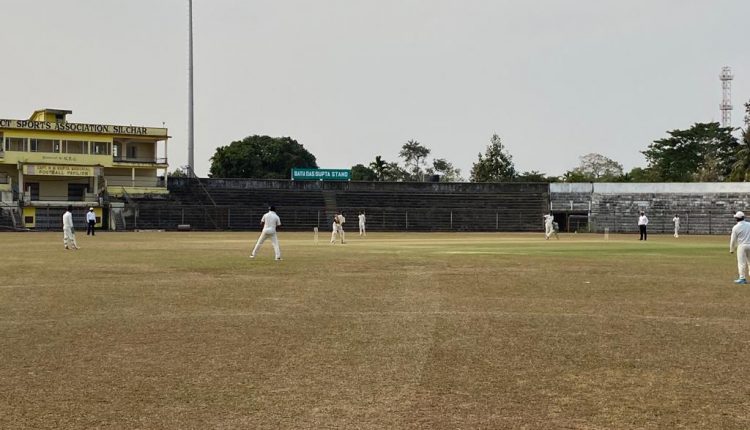 lt was a clash between the two unbeaten teams of the tournament today at Satindra Mohan Dev Memorial Stadium in Silchar. In the group B match of Assam Premier Club Championship, Yogayog Sangha took on a star-studded Town Club.

Batting first, Town Club got off to a dream start. Captain of the team Abhishek Thakuri opened the innings with Aman Singh. Just returned from Syed Mushtaq Ali trophy, Thakuri was struggling for form this season. In the last match, he scored a half-century and today he started from where he ended. Classic cover drives, wristy flicks, the star batsman stole the show in the first hour of the game. He was well complemented by Aman Singh who scored 42 runs from 53 balls. He got out when the team’s score was 87.

Singh was followed by Krishanu Dutta who had also scored a half-century in the last match. The left-hander got dismissed after putting only four runs on the board and that was the beginning of a mammoth downfall. While Thakuri kept playing his shots on one end, wickets kept crumbling on the other. Renowned all-rounder Samik Das, captain of the under 16 Silchar team Abhishek Deb, state team players Pritam Das, Rahul Singh none of the Town Club batsmen could secure a double-figure score.

Thakuri (75) was dismissed by Samir Sinha who was the star of Yogayog Sangha’s bowling attack. He ended his spell with figures 6.2 overs 1 maiden 14 runs and five wickets. Bikiran Das also picked up four wickets after conceeding only 32 runs. Sagar Chetri picked up one crucial wicket of Aman Singh to break the opening partnership. Town Club had set a small total of 154 runs for Yogayog Sangha to chase.

Centurian Joydeep Singh (1) was dismissed early by Samik Das but the attack that had Pritam Das, Rahul Singh, Dibakar Johori could not get early wickets which was the only way back in the match for them.

Debangshu Sarma (34) and Roshan (50) stitched a crucial 80-run partnership. Gourav Topno scored 30 and took the team over the line in 34.4 overs with the loss of five wickets.

Pritam Das did not get any wickets while Samik Das and Rahul Singh got one each. Sudarshan Sinha picked up two wickets while Abhishek Deb got another.

With this win, Yogayog Sangha unbeaten after three matches went to the top spot in group B.