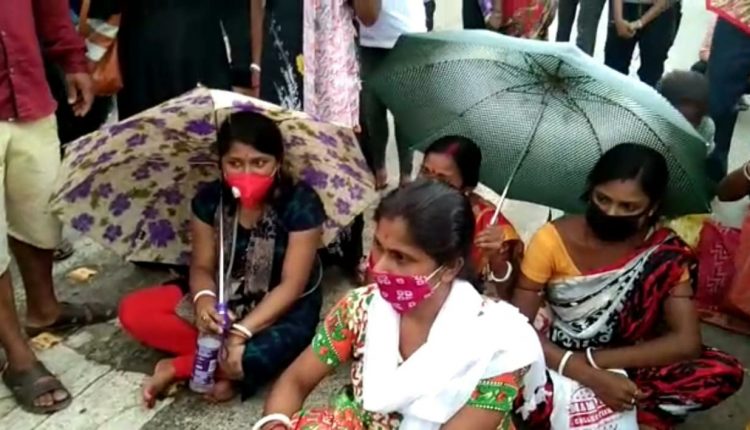 After getting deprived of 1st dose of vaccine, crowd in Badarpur resorts to protesting by blocking the National Highway road

The vaccine crisis in Badarpur of Karimganj district has resulted in a huge protest in the National Highway road today. In Badarpur’s Nabin Chanda College vaccination centre, people who came to get themselves inoculated today after waiting in queue for the whole day were asked to return when they were informed that 1st dose of vaccine wouldn’t be administered today. This in turn had enraged the people waiting there as they alleged that they’ve been coming here to the centre for the past one week for vaccination, but every time they had been asked to come back the next day as the first dose wouldn’t be given that day. The situation quickly escalated as the patience of the angry and frustrated crowd, mostly consisting of local people, started wearing thin. They started sloganeering and took to the National Highway road to protest by blocking the road.

After the crowd had blocked the road demanding the vaccine, Badarpur police came and tried to uproot the demonstration by convincing the crowd to disperse. But that had further irked the protesting people who started sloganeering again demanding that without vaccine they wouldn’t move an inch. That roadblock by the protestors had caused a huge traffic jam in the National Highway road that connects with Tripura state via Karimganj town. The situation was so volatile that the Badarpur police had to come and convince the protesting crowd at different intervals throughout the day, but to no effect. According to one of the protestors at the scene, they had been coming to get themselves inoculated for the 1st dose for the last week. She said, “We’ve been coming here for the past one week for our 1st dose of vaccine. But every day, after waiting for the whole day, we get to know that today we won’t be getting our first jab of the vaccine. Today, some of us have been waiting since 3 am and even after it had started to rain, we didn’t move away and rather chose to wait for our turn. And now they come to say that today too we won’t be getting our first jab. For how long, will the locales be deprived of this? If there’s no vaccine for 1st dose, they should let us know by hanging a notice at the front.”

Officials of the district health department were called and Badarpur police station OC in-charge Anupjyoti Kalita rushed to the scene. To quell the grievance of the protesting crowd, OC Anupjyoti Kalita called Kachudam Block PHC in-charge Dr Motiur Rahman and discussed the gravity of the situation with him. After the consultation, the OC then assured the crowd that tomorrow on Monday morning, those who want to get their first jab of vaccine can get so at the NC College centre in Badarpur. This finally convinced the protesting crowd and they soon dispersed after getting assurance from the police thereby unblocking the important National Highway road.

It is noteworthy to mention that the Nabin Chandra College happens to be the only vaccination centre in the entire town of Badarpur. For the last few days, the locals have been coming to the centre every day to register their names, but later would be informed that the first dose of the vaccine would not be given that day. On Monday, people also lined up in a queue to register their names. When it started raining, they still had to wait in the queue outside getting drenched in rain. After waiting in queue for hours, an official in-charge of the vaccination centre came and said to the waiting people that today they wouldn’t be getting their first dose of vaccine, which infuriated the people who resorted to sloganeering and roadblocking to express their frustration of being denied of vaccine over and over again. But thankfully, at the intervention of the health department, the matter finally got sorted out and the protestors soon left the site after getting assurance from the police.