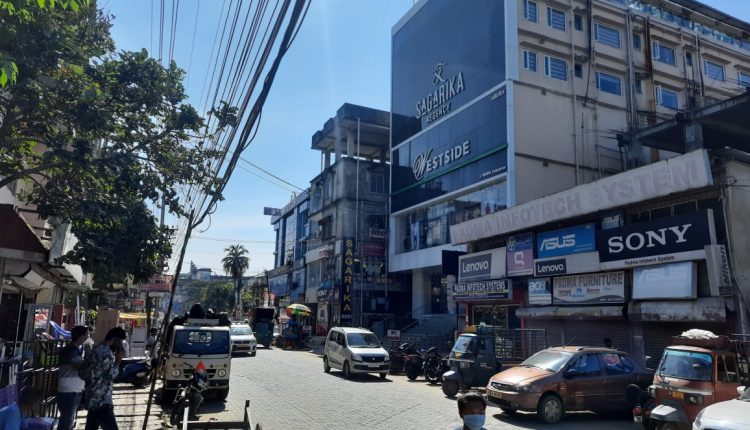 Biswajit Roy had applied for permission to build an RCC building. He had submitted a drawing along with his application on March 28, 2017, and the permission was issued on July 3, 2017. In the drawing submitted by Biswajit Roy, it is mentioned that the building will have a Basement + Ground + IV floors.

In the backside of the NOC, it was written that “The owner upon commencement of his work under a no-objection certificate shall give notice to Silchar Municipal Board that he has started his work and Authority shall cause the inspection of the work to be made within 14 days following receipt of the notice to verify that the building has been erected in accordance with the sanctioned plans.” This NOC was approved by the former chairman of the Silchar Municipality Board and the Deputy Director of Town and Country Planning.

What comes as astonishment is that no such intimation notice was submitted by the applicant to the Silchar Municipal Board. “The Board therefore never knew about the status of construction based on the NOC issued,” wrote SMB in its response to Gauhati High Court.

Upon receipt of the application an inquiry was conducted, as per normal procedure, by the Field Assistants of SMB on February 8, 2019, to ascertain whether the works have been undertaken as per specifications permitted in the Building Permission. “The report of the Field Assistant revealed major deviation from approved specifications for Coverage Percentage, FAR, Setback etc. In addition to this, the report revealed that one additional floor has already been constructed without any prior permission,” Silchar Municipality Board informed Gauhati High Court.

Niharendra Narayan Thakur was officially informed about the inconsistencies. On the basis of the report of Field Assistant dated February 8, 2020, a show-cause notice was issued to Biswajit Roy by chairman Thakur on August 8, 2019, asking Roy to reply as to why the unauthorised structure should not be demolished. Why did Thakur take six months to issue a show-cause notice despite knowing that there is such a massive inconsistency? When asked, the former chairman dodged the question. “I don’t have access to all the files and therefore whatever I say would be on the basis of whatever I am able to recollect. Four people from various parts of Silchar had lodged a complaint to the deputy commissioner and the deputy commissioner forwarded it to Deputy Director Town and country planning, therefore, once DC Ordered a separate inquiry, there was very little that we could do.”

The former chairman certainly did not address the question which was about the delay in issuing the show-cause letter. However, that is not it. Biswajit Roy submitted his reply to the show-cause letter issued on August 13, 2019. In the hearing dated August 16, 2019, the then Chairman – SMB recorded that he did not find the reply of Biswajit Roy satisfactory. Another show-cause notice was issued by the then Chairman on September 3, 2019. “No reply to this show cause has been received to date,” stated Silchar Municipality Board in its response to the Gauhati High Court. The Board adds, “No information is available in the official record on why no follow up was done on the second show-cause notice.”

From February 2019 till Niharendra Narayan Thakur ended his tenure in April 2020, why Thakur did not take any action is unknown. He was well within his rights to order demolition of the unauthorised structure yet he just kept dilly dallying. First, he took six months to issue a show-cause notice, and then he never followed up. “It is not true that we did not take any action,” counters Thakur. “When Sagarika Regency applied for a trade license, we ordered an inquiry and after we found inconsistencies, we did not issue the trade license,” asserts the former chairman. Sagarika Regence has leased a part of the building to the franchise-owner of Tata’s retail venture – Westside. Apart from that, it also has a roof-top restaurant and rooms for lodging. “It operated without a trade license,” informs Thakur. Which is again flouting SMB rules and yet no action from the chairman despite knowing.

“Before saying again and again that we have not taken any action, you need to understand that DC had already involved deputy director – Country and Town Planning. We have cooperated with the deputy director and whenever he called for files, we submitted them on time,” explains Thakur.

Time and again, Thakur referred to the deputy commissioner involving the deputy director, Country and Town Planning during the interaction with Barak Bulletin. The fact is, a complaint was submitted by Subrata Mazumder and six others on August 19, 2019, to the then Deputy Commissioner Cachar complaining about illegal construction by Biswajit Roy. The complaint was forwarded by the then Deputy Commissioner, Cachar to the Deputy Director, Town and Country Planning, Silchar with a direction to conduct inquiry within 10 days. The field assistant submitted the report on February 8, 2019, about the violations. From February to August is a span of six months where there was a hiatus on the part of Niharendra Narayan Thakur. Now what the Gauhati High Court decides in the next hearing on November 5, remains to be seen.